A Simple Explanation of Cryptocurrencies: How Technology Created a New Asset Class

Cryptocurrencies: For some, they are the future of the global financial system; for others, they are speculative assets and threaten financial stability. In some ways, both sides are right!

No matter where you stand in this debate, as an investor you should understand what cryptocurrencies are because their impact on financial markets will continue to grow in the coming years. Cryptocurrencies like Bitcoin and Ethereum have already found their place in mainstream investors' portfolios. For most of the past ten years, these assets were a niche market for technology enthusiasts, but today they are listed in the financial section of leading newspapers. That's why we want to give you the best crypto explanation and the basic knowledge you need about cryptocurrencies here at the CryptoStudio.

“Every informed person needs to know about Bitcoin because it might be one of the world's most important developments.”
Leon Louw, two-time Nobel Peace Prize nominee 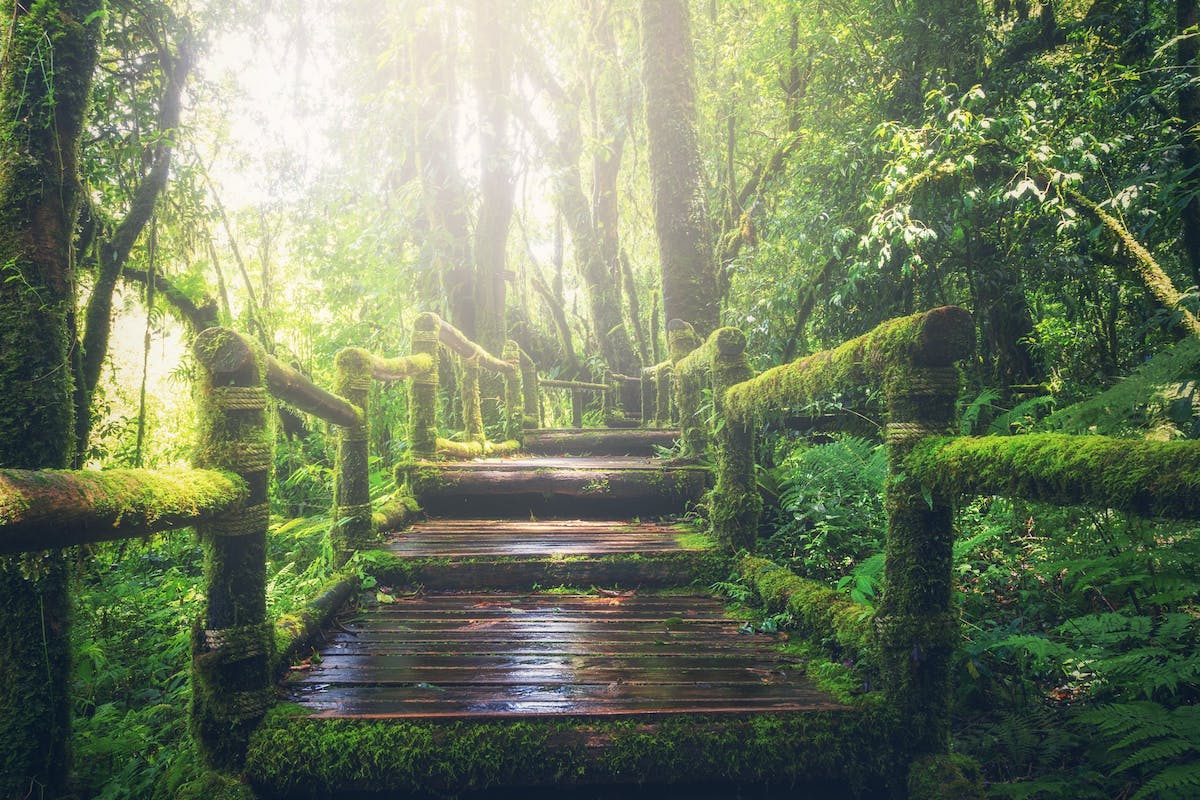 A simple explanation of cryptocurrencies

The way people trade with each other has continuously evolved throughout history: Prehistoric societies engaged in barter, the Babylonians used gold coins as a means of payment, and modern societies use so-called fiat currencies, meaning currencies issued by central banks, for example the euro or the US dollar. Trade has always been based on physical objects or means of payments backed either by tangible economic assets or by the power of institutions.

Today, most electronic monetary transactions are not backed by physical assets anymore but rely on banks and central banks. The backing of these institutions is needed mainly for one reason: Unlike with physical goods or documents, malicious actors can easily copy, delete, or alter digital data. That's why we need trusted intermediaries, such as banks, for the digital exchange of value and government oversight to monitor these intermediaries. For example, someone who transfers money from one bank account to another is not really "sending" money. Instead, the sender's bank reduces the sender's digital account balance, and the receiver's bank increases the receiver's digital account balance. No physical value is exchanged in the process, which is why it requires trusted banks and a government watchdog to enforce that trust.

That's all changing with cryptocurrencies: They represent a new form of digital value exchange based on cryptography and technology. Unlike gold, for example, cryptocurrencies (mostly) do not represent any real economic asset, and unlike fiat currencies, they are not issued by a centralized entity such as a central bank. Instead, they are based on decentralized blockchain technology.

The beginnings of the blockchain date back to the 1970s, when developers first experimented with asymmetric cryptography. The idea was to create a decentralized database that would enable tamper-proof digital entries through cryptographic encryption. The goal of the blockchain was to solve the key problem of digitization: It transforms digital data such as bank account balances into tamper-proof digital originals, meaning trustworthy intermediaries such as banks are no longer needed as the safekeepers of monetary transactions.

“Bitcoin is a remarkable cryptographic achievement, and the ability to create something that is not duplicable in the digital world has enormous value. ”
Eric Schmidt, former CEO of Google.

Cryptocurrencies: How does it work?

When you transfer a cryptocurrency, for example Bitcoin, from one wallet to another, the network will make a new database entry on the Bitcoin blockchain. A decentralized computer system will automatically validate the correctness of this transaction. The network is "trustless," meaning the cryptography ensures that data can't be altered. Such a network has the power to replace banks, central banks, and government regulators by creating a secure exchange of value without human intervention. This new form of decentralized digital value exchange based on technology is the real innovation of cryptocurrencies. It could ultimately lead to a paradigm shift: Centralized companies and institutions that today function as safekeepers of digital data could eventually be replaced by technological protocols, which have no CEO, generate no profits, and require no regulatory oversight.

These decentralized protocols can also communicate and exchange value directly with each other, completely automating payment flows. By streamlining value chains and automating monetary transactions, many processes become cheaper, faster, and more secure. Cryptocurrencies are thus not only the future of value exchange between people but also enable secure and automated machine-to-machine transactions.

Why cryptocurrencies? Shifting to a digital society

Social and economic trends are clearly shifting towards a digital society. Digital processes are more efficient, faster, and cheaper. While the internet mainly drove the last wave of industrialization, the next industrial revolution will be built on the so-called Industry 4.0 technologies, which include blockchain technology. A central challenge of the digital society is the digital exchange of value. This includes the digitization of the monetary system and digital ownership rights, for example rights to company equity or real estate. Blockchain technology provides the most promising approach to date for organizing this digital exchange of value securely and globally.

The disruptive potential of cryptocurrencies also goes far beyond today's fintech solutions. Payment providers such as Transferwise or trading apps such as Robinhood also offer low-cost and faster solutions than most legacy banks. However, all of these solutions are still centralized, meaning they require companies or institutions to organize the value exchange and ensure the validity of digital data. Decentralized blockchain applications represent not just an evolution of existing systems but a paradigm shift toward decentralization. In the coming years and decades, cryptocurrencies could further develop money as a medium of exchange and completely replace payment service providers with automated protocols.

In the early days of the internet, most retail investors didn't have a chance to participate in technological advancement through financial markets. With blockchain, everybody can invest! You don't need access to exclusive private equity deals because cryptocurrencies are tradable on public exchanges already today. They have developed into an asset class of their own.

When the media talks about "cryptocurrencies, "they often mean all blockchain-based assets. However, when talking about the "asset class" of cryptocurrencies, it is important to distinguish: By definition, an asset class is a group of similar assets whose value, performance, and risk share similar characteristics. Therefore, assets in an asset class often behave similarly when financial conditions change. For example, a Stablecoin whose value is pegged to gold is not a new asset class.

Even though the first designs for blockchain technologies existed already back in the 70s, the blockchain did not have its breakthrough until the launch of the Bitcoin network. Under the pseudonym "Satoshi Nakamoto," an unknown person (or group of people) published the Bitcoin Whitepaper in 2008. This created the first cryptocurrency, and many more followed.

A single email changed the course of history. pic.twitter.com/avzcLlD7l5

For beginners and newcomers to the asset class, it is paramount to understand that not all cryptocurrencies are the same. Bitcoin is by far the leading cryptocurrency. It has a higher market cap than Facebook and comes close to the precious metal silver (as of April 2021).

#Bitcoin is getting harder and harder to ignore.

When it comes to market cap:

Ethereum, the second-largest cryptocurrency, enables creating programmatic contracts on the blockchain (also called smart contracts). It has a completely different use case than bitcoin, which is primarily a payment network. Then there are Stablecoins whose value is pegged to an underlying asset. As an investor, you should understand the different types of cryptocurrencies and other digital assets. And you should study in detail how each cryptocurrency works and understand their business models, their so-called "tokenomics."

“I see a lot of people getting into things they don't understand.”
Mike Novogratz 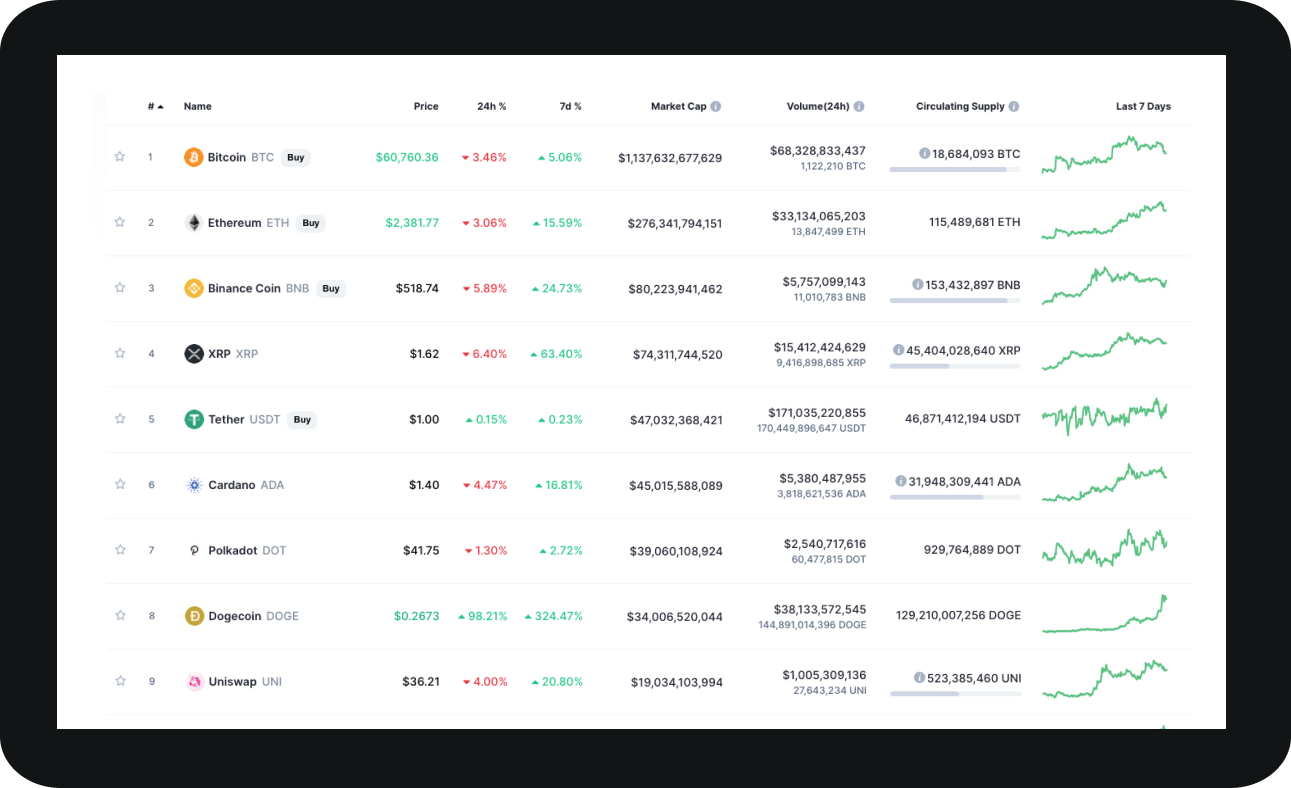 What could be the future of cryptocurrencies

Today, cryptocurrencies are at a critical turning point. Investors don't ask anymore why they should invest in cryptocurrencies, but why not. Investment advisors today also look more optimistic at the asset class. As cryptocurrencies move more into the mainstream, more people will invest, and prices will pick up.

As the asset class matures, additional applications emerge that make cryptocurrencies more attractive to investors. One example is Crypto Lending, where investors can lend their cryptocurrencies to others and generate cash flow. Institutional investors are also increasingly interested in crypto investing: Hedge fund star Paul Tudor Jones has invested a small portion of his funds' assets in Bitcoin. Another prominent example is car manufacturer Tesla, which invested $1.5 billion in Bitcoin.

To be clear, I am *not* an investor, I am an engineer. I don’t even own any publicly traded stock besides Tesla.

However, when fiat currency has negative real interest, only a fool wouldn’t look elsewhere.

Bitcoin is almost as bs as fiat money. The key word is “almost”.

Elon Musk is the founder and CEO of carmaker Tesla

Bitcoin and other cryptocurrencies offer investors return opportunities and advantages in portfolio management. As investors, we primarily look at the financial attractiveness of cryptocurrencies, yet the real potential lies in the underlying blockchain technology. At its core, blockchain is not about creating a new asset class; rather, the asset class is a welcome byproduct of an even larger development: Cryptocurrencies can replace centralized systems and institutions with decentralized networks. Bitcoin is just one example of how this could work: Should Bitcoin one day establish itself as a global, decentralized unit of value, we would experience the separation of power and money for the first time in human history. Instead of institutions formed by states, a decentralized computer system would then govern the monetary system, solely based on mathematics. Decentralization also has enormous disruptive potential in developing countries, where institutions and currencies are generally less stable than in the developed world.

Willy Woo, a well-respected Bitcoin analyst, presented the graph below in which he compares today’s stage of Bitcoin to the early years of the internet. If cryptocurrencies unleash similar disruptive potential, the market capitalization of the overall crypto market could increase many times over in the coming years. Of course, there are risks as well: The asset class is still young, and no one can predict its future development. There is high price volatility, IT security risks, the danger of price manipulation, regulatory risks, and a lack of liquidity. You should consider the risks and opportunities and make your own investment decision.

In terms of adoption, Bitcoin has roughly the same users as the Internet had in 1997.

But Bitcoin's growing faster. Next 4 years on current path will bring Bitcoin users to 1b people, that's the equivalent of 2005 for the Internet. pic.twitter.com/Np9yTR3WkL