"Web 3.0", or short: Web3, is the new talk in town. If you google the term "Web3, "you will find all kinds of stuff: Most of it is very technical and incomprehensible to the average Internet user. Still, you should understand the broader trends and concepts, especially as an investor. Because in the years ahead, Web3 will offer new financial opportunities.

But step-by-step: What are Web1 and Web2?

The first commercial Web1 applications emerged in the early 1990s. At that time, "the Internet" consisted of static web pages. It was a "read-only" Internet, in that users could only consume information. Platforms like Facebook or Netflix didn't exist back then; the stars were websites like Britannica Online or Yahoo. IP, HTTP, URI, and HTML provided the technological infrastructure.

In 2000, the dot-com bubble burst, and many Internet companies disappeared from the market. Despite this setback, the bright minds of the tech world focused on the further development of innovations such as JavaScript, HTML5, and CSS3. The result was the gradual rise of Web2.

While Web1 mainly enabled the transmission of information, Web2 focuses on interaction: Users make their data available to service providers such as social media, e-commerce, or payments providers, enabling these apps to function. In other words: Web2 users are no longer just consumers; they are also the product.

Web2 to Web3: What's the problem with centralization?

Web2 has significantly changed the way we communicate and interact with each other. We make phone calls via WhatsApp, shop on Amazon, stay in other people's properties booked through Airbnb, and pay via online banking and fintech platforms. Web2 has undoubtedly increased our wealth and convenience, but it has also created new challenges:

Web2 is based on a server-client structure, meaning centralized private corporations control and own the data. The result is that these corporations have enormous monopoly power and create barriers to entry for potential competitors. All Web2 applications are controlled by centralized corporations, including the entire banking and financial system.

The Web3 has set out to break up the market power of these centralized players by replacing the centralized server-client infrastructure with distributed ledgers, the most common type being the blockchain. So instead of all data being stored on a centralized server, it will be scattered across a decentralized computer network. Centralized entities, which previously acted as intermediaries, will thus become obsolete.

This is in contrast to today's #Web2 client-server architecture where apps and data are stored on servers owned by a single entity (namely big tech) and we can only access apps and data through these servers. pic.twitter.com/23gAV7dpGR

Here is an example: Anyone sending money from one bank to another today uses the centralized servers of the respective banking providers. The banks act as intermediaries by carrying out the transaction. The user must hand over all the data to the banks involved and rely on them to execute the transaction correctly. The bank, of course, charges a fee for this service. This is Web2 banking.

In Web3 you can send your transaction via a decentralized blockchain such as the Bitcoin blockchain. This blockchain independently verifies the accuracy of the transaction through the use of mathematics and computing power. Unlike Web2, banks are no longer needed as intermediaries. That also means the user retains control over their data, and since there is no centralized actor making money from the transaction, there are no fees to pay.

In other words, Web3 should return data sovereignty and ownership rights to the user – that's at least the idea.

The Web3 login has less friction than Web1, more privacy than Web2, and comes with a native bank account which neither Web1 nor Web2 does.

Looking back, the starting point of Web1 was probably the Netscape web browser. The start of Web3 could be the launch of the Bitcoin network. The decentralized cryptocurrency needs neither banks nor central banks but represents a peer-to-peer network based on blockchain technology. Five years after the launch of the Bitcoin blockchain, the same technology was used to develop the Ethereum blockchain. Ethereum enables the automation of token-based transactions using smart contracts.

Changpeng Zhao, CEO of crypto exchange Binance, also sees the start of the Web3 with the launch of the first blockchain

Today, a variety of applications run on the Ethereum Blockchain - and on other blockchains as well. These include decentralized financial applications (DeFi) such as Crypto Lending, where savers provide liquidity for loans via a DeFi platform and earn interest in the process. Smart contracts replace centralized intermediaries, such as banks, creating a "trustless "network. By eliminating intermediaries, the value chain becomes more efficient and cheaper.

Non-fungible tokens ("NFTs") are another Web3 application. NFTs represent securitized ownership of a uniquely identifiable digital asset, such as ownership of a graphic, artwork, or domain. As NFTs are unique, they enable the transparent documentation of digital property rights and their automated transfer without centralized intermediaries. This is critical for a wide range of Web3 applications: While it is irrelevant to users which Bitcoin they own, originality matters in the case of a digital property right, for example, to a piece of land.

Strictly speaking, a banknote is also an NFT because each banknote has its own serial number. That means banknotes are unique as no two banknotes are the same, unlike Bitcoin. But the lived reality is that it does not matter which banknote one pays with. That doesn't matter for a means of payment, but it does matter for artwork or other property rights.

The Web3 could also replace conventional types of companies with new forms of decision-making. Decentralized Autonomous Organizations ("DAO") could replace traditional corporate hierarchies by replacing centralized ownership with a governance mechanism based on tokens. In DAOs, decisions are made democratically through voting, with voting rights based on the number of tokens one owns. The employees of a DAO are also compensated for their work with tokens. Instead of receiving a salary set by management, they are compensated according to their contribution to the DAO's common mission with ownership rights in the DAO. The goal is to create additional incentives.

All these use cases could eventually come together in the so-called metaverse: The metaverse is a virtual reality where people communicate, trade, play, learn, or otherwise interact with each other. Unlike in Web2, where the user is the product, in Web3, the user is also the owner. 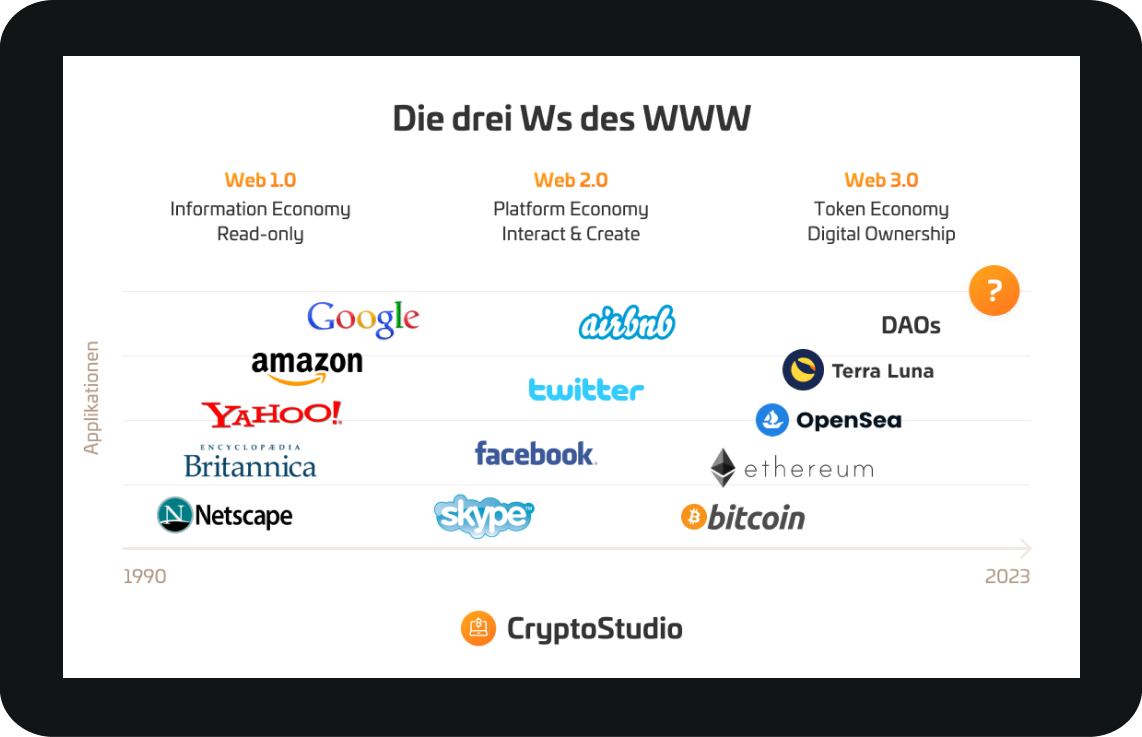 CryptoStudio; the evolution of the internet

Web3 is still in its early stages, and many questions remain: Technological scalability is a key challenge, just like it once was in Web1, as the data processing speed of a decentralized network is significantly inferior to the centralized Web2. Bitcoin transactions, for example, are much slower than transactions over the Visa or Mastercard network. The user experience of Web3 applications also currently cannot keep up with Web2 applications. For example, it's more complicated for many users to take out a loan on a Web3 platform than on a Web2 fintech or bank.

In addition, there is the question of how decentralized the Web3 really is? At least today, the functionality of Web3 still depends on Web2 infrastructure. If infrastructure providers such as Amazon Web Services were to fail, most Web3 applications would also no longer be available. Many decentralized applications are also funded by venture capital firms, which then hold a large number of tokens and thus have decision-making authority in the network. Examples of this are the crypto exchange Uniswap or the crypto lending protocol Compound Finance.

Outlook: The future of Web3

To realize the vision of a decentralized Web3, there is still much innovation work to be done. That said, the Web2 did not come into being overnight either. It has evolved in 30 years from an information economy to a platform economy. The token economy is the next logical evolutionary step.

It is not yet clear today how this evolution will continue. Decentralized protocols will likely coexist with centralized platforms in the medium term and continue to gain market share. This is already happening. Decentralized financial protocols alone already have tens of billions of US dollars in assets under management today. While this is small compared to the traditional financial industry, it is relevant, and growth continues. 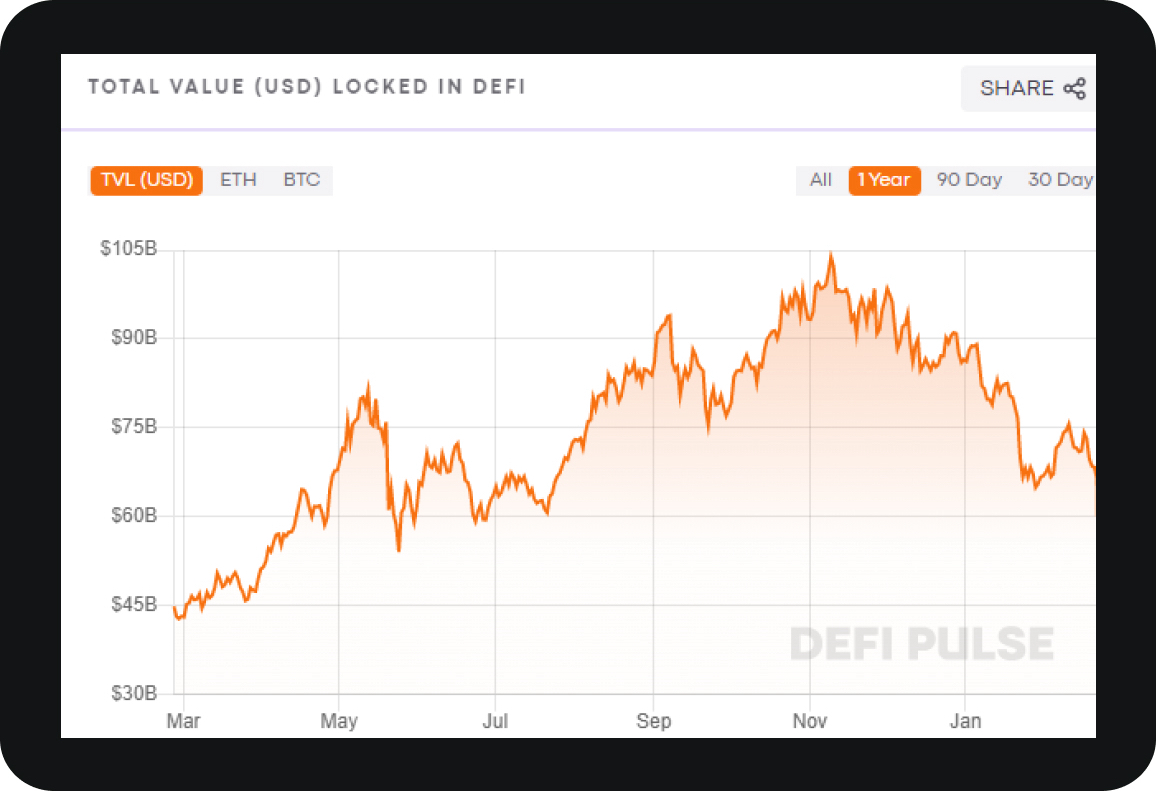 As the transition from Web1 to Web2, moving from Web2 to Web3 will be a gradual innovation process. It will become clear which technologies and business models are superior in the long term. And in the end, we will live in a new world.

There are opportunities for early investors. In contrast to Web1 and Web2, where mainly founders and venture capitalists were among the big winners, everyone can benefit more directly from Web3. As such, Web3 is the critical tool towards greater financial sovereignty for everyone.